Conscious Eating is Beyond the Farm, it’s Farmworker to Table 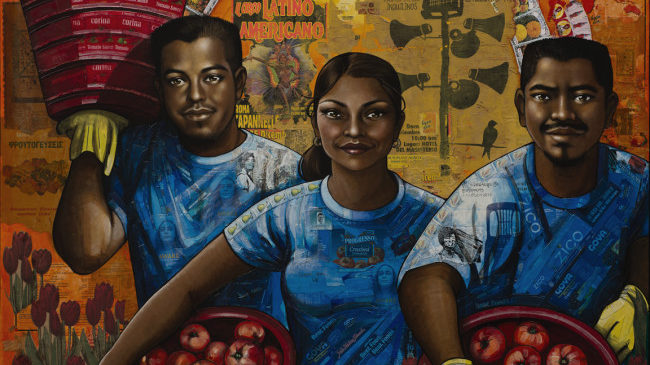 Social concern regarding food is reaching more households across the United States. Americans are becoming more invested about where their food comes from, and how its sourced. Farm-to-table or farm-to-fork movements are pushing for more local foods in schools and restaurants. Interest in organics are becoming more popular in conversation. But, what if this collective concern went beyond just the scope of growing standards and pesticides? Bret McCabe shares this concern and writes in the Johns Hopkins Magazine about this broader focus, prompting us to widen our scope from ‘farm to table’ onward to “farmworker to table”. Collectively, our social concern can become more rooted in the issues surrounding farmworkers, even moreso, migrant farmworkers. Migrant farmworkers face issues of unfair poverty wages, sweatshop like work conditions, as well as rape and sexual assault in the fields. As migrant workers, many are unable to communicate the disadvantages and injustices they face daily due to language barriers, and for many a lack of education. Voices from these communities and movements have arisen over the years to bridge that gap and speak on behalf of the farmworkers and or work with them to articulate demands for change. A prominent force representing migrant farmworkers and doing this very work is the Coalition of Immokalee Workers out of southwest Florida, pioneers of the Fair Food Program, putting social responsibility on corporations–deeply planting the seed of concern.

The Origins of a Movement

Florida tomato harvesting farmworkers out of Immokalee in southwest Florida are some to have felt the backhand of the abuse of human rights. Upon organizing within a room in a local church meeting weekly in 1993, the Coalition of Immokalee Workers (CIW) formed, communally deliberating how to advocate social change in the fields. Big moves were made, including but not limited to a notable 234 mile march in 2000 from Fort Myers to Orlando. These acts of solidarity by the marginalized migrant farmworkers in and outside CIW, resulted in change nullifying over two decades of the increase in poverty wages for those working behind the scenes of the tomato industry. Progress continued to be made over the years, it was in 2010 however that the Fair Food Program, a result of the Campaign for Fair Food, saw its genesis. As explained by the CIW, their national Campaign for Fair Food, “educates consumers on the issue of farm labor exploitation – its causes and solutions – and forges alliances between farmworkers and consumers in an effort to enlist the market power of major corporate buyers to help end that exploitation.” The FFP operates as a partnership with the farmworkers, Florida tomato growers, and buyers and has set a model of social responsibility from seed to shelf. A Washington Post op-ed from 2012 praises the FFP saying that it’s, “one of the great human rights success stories of our day”. As more large grocery stores and other major buyers in the tomato agricultural industry began to join the FFP and take part in Fair Food Agreements, the sustainability of the program stands.

Fair Food Agreements between buyers and the CIW are in fact legally binding, therefore committing those large partners to accountability by purchasing Florida tomatoes solely from those growers that are in good standing and compliant with the standards enlisted by the FFP, ceasing to then purchase from those growers who have failed to adhere and act in accordance with the code of conduct that the FFP has set. Similar to the defamation of those companies or celebrities who have been outed for wrong doing or unclass acts, market consequences enforce these standards are always met. In other words, retailers don’t want to risk having their namesake slandered with the libel of human rights abuses. Therefore, by eliminating ties to farms that are abusive as well as unfair, reputational risks are avoided because their brand has this “protection” when as a whole, top-down, corporate engages in social responsibility as opposed to soft-pedaling over it–a noteworthy transparency consumers crave. Regarding the FFP and coverage of farmworkers harvesting Florida tomatoes, the CIW states on their website that,

“nearly all of the members of the Florida Tomato Growers Exchange – representing over 90% of the industry – are participating in the FFP. Therefore, all farmworkers harvesting Florida tomatoes for those growers are covered under the Fair Food Program. These growers employ approximately 30,000 workers at any given moment during the season and, due to high turnover, between 80,000 and 100,000 workers over the course of a season.”

Corporations Begin to Cooperate with CIW

With the FFP pushing for and succeeding in increased wages, protecting human rights, and the practice of socio-environmental stewardship, it is no surprise that more large partners are joining over time. Currently CIW is fighting to have fast food competitor Wendy’s, and “Florida’s Hometown Grocer” and 8th largest privately owned corporation (according to Forbes 2018) Publix Supermarkets become a part of the FFP. The resistance of these companies has further been publicly explored and addressed through education on behalf of the CIW combating claims made by either company through clarification of what the FFP intends to and does in fact do.Current corporate buyers that have joined with the progress of the FFP include Yum Brands (2005), McDonald’s (2007), Burger King (2008), Subway (2008), Whole Foods Market (2008), Bon Appetit Management Company (2009), Compass Group (2009), Aramark (2010), Sodexo (2010), Trader Joe’s (2012), Chipotle (2012), and Walmart (2014).

Utilizing a “human rights based code of conduct” with six main elements, the FFP is monitored by an independent third party not-for-profit, the Fair Foods Standards Council (FFSC). FFSC is directed by former New York Supreme Court Justice the Honorable Judge Laura Safer Espinoza. Espinoza ensures everything on the fields and otherwise is in order and in compliance with that code of conduct. Within the code, firstly, corporate buyers participating in the FFP never pay farmworkers directly (a misconception of both Wendy’s and Publix). A premium, FFP’s penny-per-pound premium, is paid that is incorporated into the overall price of the produce. Participating buyers are paying for their tomatoes as they always have, just with a premium for those buyers who wish to take part and be billed that way; this is similar to any fair trade product premium. The other logistics are handled downward functioning as a pay increase among farmworkers; it is a line item bonus as a result of buyers such as Whole Foods Market and Taco Bell taking part in the penny-per-pound premium initiative. CIW’s Fair Food premium is heralded for generating over $30 million between January 2011 and October 2018 that were then paid into the program.

Other elements of the code of conduct include a zero tolerance policy for sexual assault and forced labor, there are health and safety committees, consistent auditing on the farms by the FFSC, and the CIW hosts on the farm on the clock worker-to-worker education sessions for farmworkers (and guests) so that they may become aware of their rights, new or old, as well as their responsibilities. There is also a 24 hour hotline that the FFSC staffs, “a worker-triggered complaint resolution mechanism” that investigates complaints that have been made, creates corrective action plans, and if needed, a suspension of a farm’s Participating Grower status affecting its ability to sell to participating buyers.

Through their actions both past and present, this can very well be seen. When purchasing from a grocer or eating at a restaurant that has aligned with CIW’s Fair Food Program, you can be rest assured as a conscious consumer that its ethical eating. Bret McCabe in the Johns Hopkins Magazine references Eric Schlosser, “Does it matter whether an heirloom tomato is local and organic if it was harvested with slave labor?” A better idea might be to think about eating from farmworker to table.” (McCAbe 2018)